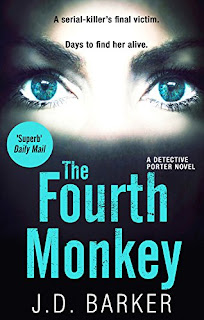 
📕My Review
Chicago detective Sam Porter has spent over five years trying to capture The Four Monkey serial killer. He believes he's finally got his man when a pedestrian is hit and killed by a bus. He had in his possession a small white box tied up with black string which he'd been attempting to mail; the contents of which prove he's taken a final victim who may still be alive. Sam and his team now face the ominous task of finding the victim before time runs out. All they have to go on are clues the killer carefully 'concealed' in full view.

This book is sheer brilliance from start to finish. It literally oozes quality from every page. It's a terrifying journey into the creation of a monster. There are so many twists and turns it leaves the reader breathless. The plot is exceptional in its construction and execution. Small details are carefully interwoven to create a masterpiece in its genre.

I have no doubt The Fourth Monkey will be an international bestseller upon its release in June 2017. A must-have read.

My thanks to author J.D. Barker, publicist and HQ for providing a copy of this book.

Other reviews:
The Fifth To Die
The Sixth Wicked Child

For over five years, the Four Monkey Killer has terrorized the residents of Chicago. When his body is found, the police quickly realize he was on his way to deliver one final message, one which proves he has taken another victim who may still be alive.

As the lead investigator on the 4MK task force, Detective Sam Porter knows even in death, the killer is far from finished. When he discovers a personal diary in the jacket pocket of the body, Porter finds himself caught up in the mind of a psychopath, unraveling a twisted history in hopes of finding one last girl, all while struggling with personal demons of his own.

With only a handful of clues, the elusive killer’s identity remains a mystery. Time is running out and the Four Monkey Killer taunts from beyond the grave in this masterfully written fast-paced thriller.
Share